It’s true what David’s Psalm 8 says ‘You have set your glory in the heavens’.

Just go to pictures taken by the Hubble telescope to see the wonders and majesty of God’s created universe. The first few pictures below are of the Pillars of Creation in the Eagle nebula. They are the birthplace of stars formed out of their gases and dust. Around 20 trillion miles in height and 7000 light years from our home, Earth, they’re only one example of God’s overwhelming and staggering power. Below them are even more examples of his creativity.

So don’t make your God small. It still amazes me that someone so large and powerful wants to love me, but He does. He wants to come and live with me and anyone who wants to believe and be blessed by all His glory and power. So let Him with all His beauty into your life today! You will not live to regret it. May He bless you life today!

Lord, Oh Lord, how majestic is Your name in all the earth!! 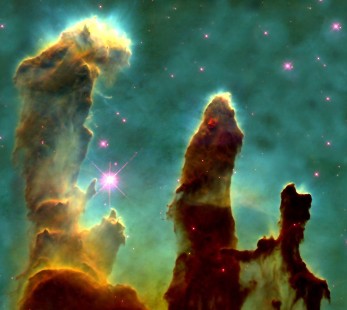 NASA’s Hubble Space Telescope has revisited the famous Pillars of Creation, revealing a sharper and wider view of the structures in this visible-light image. Astronomers combined several Hubble exposures to assemble the wider view. The towering pillars are about 5 light-years tall. The dark, finger-like feature at bottom right may be a smaller version of the giant pillars. The new image was taken with Hubble’s versatile and sharp-eyed Wide Field Camera 3. The pillars are bathed in the blistering ultraviolet light from a grouping of young, massive stars located off the top of the image. Streamers of gas can be seen bleeding off the pillars as the intense radiation heats and evaporates it into space. Denser regions of the pillars are shadowing material beneath them from the powerful radiation. Stars are being born deep inside the pillars, which are made of cold hydrogen gas laced with dust. The pillars are part of a small region of the Eagle Nebula, a vast star-forming region 6,500 light-years from Earth. The colors in the image highlight emission from several chemical elements. Oxygen emission is blue, sulfur is orange, and hydrogen and nitrogen are green. Object Names: M16, Eagle Nebula, NGC 6611 Image Type: Astronomical Credit: NASA, ESA, and the Hubble Heritage Team (STScI/AURA) 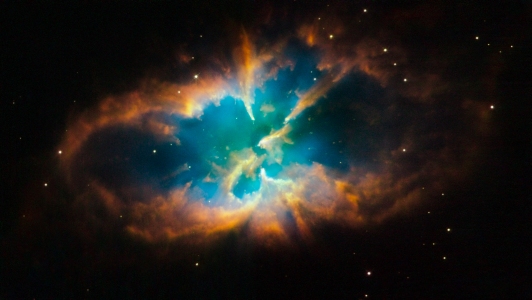